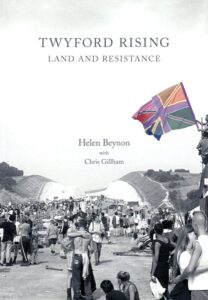 As dawn was breaking on April 10th 1992 I walked home from the Winchester count. A Conservative government had, rather unexpectedly, been re-elected. I looked out over the valley towards St. Catherine’s Hill, now scarred with a white gash into the chalk, and reflected bitterly that while governments come and go what was being done to this peerless bit of English landscape was forever.

This book tells the story of the campaign to stop the desecration – a tunnel would have cost little more and preserved much of the land of greatest ecological and landscape value (although that is to put the matter into Cost/Benefit terms which have no place in the ethos of this book.) It is a beautifully written narrative, into which are woven the recollections of the activists who placed their bodies in the way of the bulldozers. My only criticism is that the authors do not mention the history of militancy that already existed in Winchester from the attempt, fifteen years earlier, to build the motorway through the watermeadows.

For those who are interested and who have read this far I cannot do better than to quote Helen’s concluding paragraphs: “…what happened at Twyford was, arguably more than any other recent protest in the British Isles, not just for the land, but also of it. The events of 1992 and 1993 were almost unique amongst the road protests of the 1990s: not only did we still have our innocence and believe we could win, but a vital element was just being on the land, living with its rhythms and celebrating the place. The land cast a spell with its beauty, history and peace, with what seemed like the impossibility of losing it and the grief that followed.

Twyford Down became a byword for environmental protest, for the strength of the connection that can be forged between people and place. I have been to meetings and gatherings since where I hear people tell others of what happened on Twyford Down, even though they have only read of it, or heard tell. It seems presumptuous in those moments to step in and say, “I was there” and stake a claim on a legend.

Yes, Twyford Down richly deserves to be part of the legends of these Islands, for it is a lost land now, which once was filled with beauty and hope. Speaking the name alone should be a remembrance of why people speak up for wild places; why they find the courage and passion to take direct action.

This book is just part of the story, told in the words of just some of those who played a part in the tale and in the pictures or leaflets they made. Others will tell different stories, relate their part in the legend. Maybe Twyford Down is a story that will never end, for there will be more gatherings there, the name and the protests will continue to be evoked.